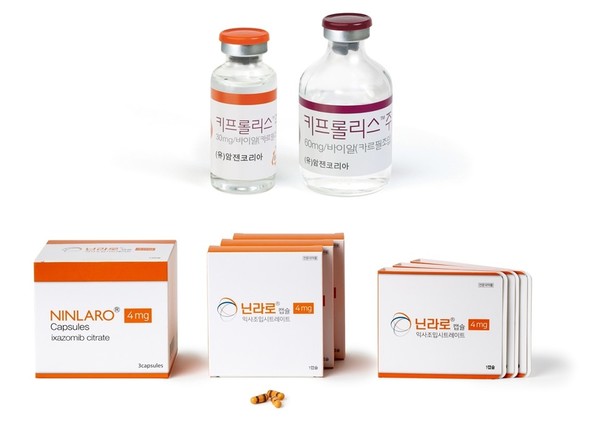 A drug ingredient called thalidomide caused a terrible congenital disability crisis in the 1950s because of its side effects. However, the drug is still used. The case shows that there is no such thing as ‘bad medicine’. Certain drugs that were undervalued in the past are being reassessed today. Depending on when, how and to whom the drug is used, it can become an “innovative” drug. After all, a pharmaceutical product is a product. Drug manufacturers compete to sell their drugs and attract them to doctors. Korea Biomedical Review celebrates its fifth anniversary and conducts ‘Pharma Battle’, a series of articles comparing rival drugs. KBR’s assessments referred to studies, market situations and expert opinions. – Ed.

Multiple myeloma (MM), usually occurring in the elderly, is a blood cancer that is difficult to cure because 85-90 percent of MM patients experience a relapse after the first treatment.

Repeated relapses reduce the response rate and duration of response, and the number of patients moving on to the next treatment phase decreases. Thus, a patient with the first relapse of MM needs an optimal treatment strategy that takes into account several factors such as the first drug, the patient’s side effect and the time to relapse.

Two drugs in combination have been widely used in the past in patients with the first recurrence. However, after second-generation proteasome inhibitors (PI) have proven their efficacy in three-drug combination therapy, doctors now prefer three-drug treatment.

The US National Comprehensive Cancer Network and European Hematology Association-European Society for Medical Oncology recommend second-generation PIs as a treatment option for relapsed and refractory MM.

Now the second-generation PIs, Amgen’s Kyprolis and Takeda’s Ninlaro, are starting to compete in earnest.

Kyprolis won the indication in November 2015 for MM patients who had received one or more treatments as combination therapy with lenalidomide and dexamethasone or dexamethasone. The combination of three drugs was reimbursed in 2018.

Ninlaro was given the nod to treat MM patients who had received one or more combination therapy treatments of lenalidomide and dexamethasone in July 2017. The three-drug combination won the fee in March 2021.

Kyprolis and Ninlaro demonstrated a therapeutic effect with a three-drug treatment compared to the two-drug combination, Rd (lenalidomide+dexamethasone).

Kyprolis proved the efficacy of the KRd therapy in the ASPIRE trial. The study results of 792 patients with relapsed and refractory MM who had received one to three types of treatment showed that KRd therapy significantly prolonged median progression-free survival (mPFS), the primary endpoint, compared to Rd therapy.

The mPFS of the KRd group was 26.3 months, which was 8.7 months longer than the 17.6 months of the Rd group. The KRd therapy reduced the risk of disease progression and death by 31 percent.

The overall survival rate (OS) in the second year was 73 percent, higher than 65 percent of the control group. In the post-analysis of the ASPIRE study, 31.8 percent of the KRd group achieved complete remission (CR), compared to 9.3 percent in the Rd group.

The IRd therapy reduced the risk of disease progression and death by 26 percent. Also, 14.2 percent of the IRd therapy group achieved CR, higher than that of the Rd treatment group at 7.4 percent.

Professor Kim Ki-hyun of Samsung Medical Center’s Department of Hematology and Oncology said Kyprolis was superior to Ninlaro, although no study compared the two one-to-one.

“If a patient and the guardian can visit the hospital often and have an active will to undergo the treatment, and if the patient is in good condition and can tolerate the combination of three drugs, a doctor will likely use Kyprolis-using three drugs . therapy,” Kim says.

Ninralo, the latecomer PI, has advantages in terms of safety and patient convenience.

In the TOURMALINE-MM1 study, the three-drug IRd therapy was comparable to the two-drug Rd treatment in the frequency of adverse events, on-trial mortality, and the number of cardiovascular adverse events that can be fatal in elderly patients.

The results were meaningful given the common side effects of the KRd therapy, such as cardiovascular diseases such as shortness of breath, heart failure, ischemic heart disease,

Ninlaro is also the first and only oral PI. While patients must visit a hospital to receive Kyprolis, they can take a long-term medication of Ninlaro at home as long as they enter a stable maintenance phase of the drug. This can save hospital visits, drug costs and patient time.

“I participated in five clinical studies with Ninlaro. While some patients had rashes, most had excellent drug tolerance,” Kim said. Because Ninlaro is an oral drug, it will be useful for elderly patients or those who cannot visit the hospital often, such as those living in provincial areas, said he.

Kim noted that the KRd therapy has cardiovascular disease as a side effect. “We also consider cardiovascular side effects when prescribing to elderly patients with underlying diseases such as heart failure,” he said. “In this regard, IRd therapy is a good treatment option.”

When a hospital visit is tough during the Covid-19 pandemic, Ninlaro is a beneficial drug, Kim added.

Who is the winner, Kyprolis or Ninlaro?

In relapsed and refractory MM treatment, the ultimate goal is to extend the time until the next recurrence. A physician should consider patient compliance as the patient needs to maintain the therapeutic effect by taking drugs continuously.

Kyprolis-using three-drug combination not only prolonged patient survival by improving PFS, OS and CR, but confirmed a consistent, long-lasting effect in four-year data from patients using Kyprolis as the first treatment option after the first treatment. relapse.

However, Kyprolis requires caution when used in patients with cardiac-related co-morbidities. Since 63 percent of MM patients are 65 years of age or older, cardiovascular side effects should not be overlooked.

In this regard, Ninlaro offers good drug tolerance. Ninlaro can ease the burden of MM patients with physical disabilities who require lifelong treatment.

However, doctors are now even considering a four-drug combination to provide a strong therapeutic effect in the first-line treatment of relapsing MM. Thus, Kyprolis is in a superior position to Ninlaro as a basic treatment option, experts say.