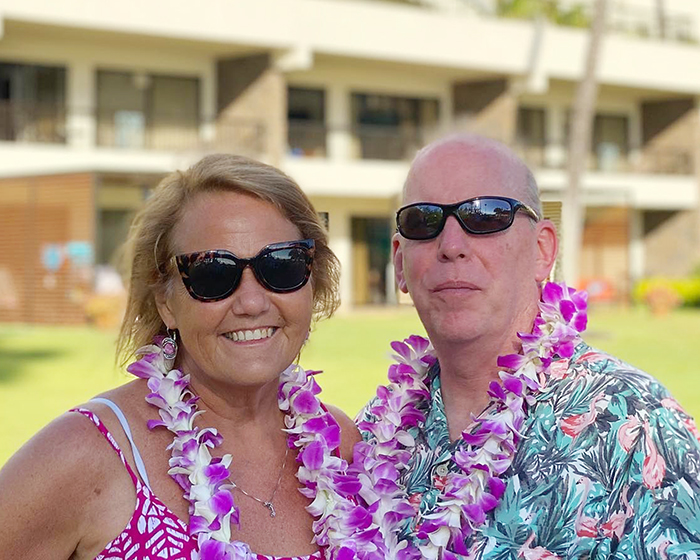 A long-time resident of Homewood, Lynn Calhoun had a 34-year career as a social worker at Churchill and Willow Schools before retiring in June 2019. Now she focuses on sharing information about metastatic breast cancer (MBC).


Calhoun, one of thousands who suffer from MBC, was one of two specially appointed ambassadors to Illinois for the #LightUpMBC event on Oct. 13, designed to raise awareness for metastatic breast cancer, a cancer that affects the liver, bones. and lungs travels and brains. There is no cure, MBC patients are in treatment for the rest of their lives. It is estimated that 115 people die from MBC every day.

The October 13 event, hosted by METAvivor, a volunteer group that has raised awareness and fundraising for MBC research, put green, blue-green and pink spotlight on buildings in downtown Chicago and more than 100 points of interest in the United States, Canada and Ireland .

The event was live streamed and Calhoun had a short segment discussing the need for more funding for MBC research. The event raised over $100,000 and Calhoun personally raised approximately $3,000 through donations from friends and family.

At the age of 59, Calhoun is committed to her family – her husband, three children and three grandchildren – and to raising awareness and financial support for MBC.

“I’ve been living with an incurable disease, stage four metastatic breast cancer (MBC) for two and a half years,” she said. “I pray every day that I will live long enough to see my two unmarried children walk down the aisle and my grandchildren grow up. My husband, Jim, and I would like to travel a bit. is not over yet.”

She’s no newcomer to the awful world of cancer. When she was 47 years old, she was diagnosed with first-stage breast cancer. With a little humor, she describes that time as “easy-peasy” compared to what she’s dealing with now.

“I had a lumpectomy (breast tumor removed), six weeks of radiation and a prescription drug that I had to take for five years. I passed the five years that I was cancer free and was considered ‘cured’. ”

Ten years later, she had pain in her side for days and sought medical attention.

“I went to an emergency room and got a CT scan. I was told it was probably muscle pain,” she said.

Two months later, she requested a copy of the test report, and to her surprise, swollen hilarious lymph nodes were reported.

“I went straight to my oncologist, who ordered a CT scan, PET scan, an MRI, and a bone scan. The test results revealed the news that no one ever wants to hear. Out of nowhere, I was told I had a metastatic breast. cancer (MBC) in many of the bones in my body and that there was no cure, only treatments to slow the progression of the disease. “

She also found that MBC typically travels to the liver, bones, lungs, and brain, leaving MBC patients on treatment for the rest of their lives – with only 22 percent of American MBC patients living longer than five years.

“I didn’t know that breast cancer could spread like this, or that it could even return after so many years. I didn’t realize I had to worry that stage four breast cancer would return, ”she said.

“I had clean mammograms every year and was not the least bit worried. I had no risk factors, nor any genetic predisposition to cancer recurrence. I didn’t know (MBC) could happen to anyone – men, women, and young women. plan to be one of 22% who survive beyond five years,” she emphasized.

“In the beginning of my MBC diagnosis, I couldn’t really talk to anyone about it. But as time went on and I learned more about it, I realized that people needed to know something about the disease, not just mine, but they should do that too. Realize that it can happen to anyone! “

Her research found that by 2020, an estimated 42,170 Americans will die from MBC, the equivalent of 115 women and men a day. This knowledge prompted Calhoun to begin her “work” on Earth to raise awareness of MBC and its need for funding.

“There is so much focus on the pink ribbon breast cancer campaigns that the MBC patients feel invisible and forgotten in the campaigns,” she said. “And sadly, less than 5% of total breast cancer research is currently spent researching metastatic breast cancer – the breast cancer that kills. If you want to find a cure, you need to cure phase 4!

“Maybe I’m here to help educate and raise awareness about this disease,” she said

Calhoun remains positive and says not to postpone anything. She and her husband fulfilled one of her desires to travel just before the closure of COVID-19.

“We took our whole family to Hawaii and had a great time. We came home and decided to remodel our kitchen. If I want to do something, I do it. Why should I delay something I want to do?

“And I want to do everything I can to make people aware that MBC does not discriminate. It doesn’t matter how much money you have, the color of your skin, how old you are, how much your family needs you… it can happen to anyone, just like that. ”

For more information on metastatic breast cancer and the research and fundraising efforts for MBC, please visit www.metavivor.org.