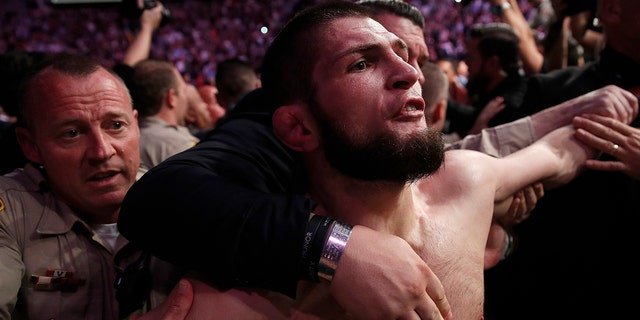 Khabib Nurmagomedov predicted Monday that Conor McGregor’s career was essentially over after he suffered a leg injury at UFC 264 and that promotion of the UFC star is bad for sport.

Nurmagomedov, one of McGregor’s fiercest critics and who beat him in the Octagon, told ESPN that McGregor has shown his true nature in recent years.

FILE – In this October 6, 2018 file photo, Khabib Nurmagomedov is held out of the cage after battling Conor McGregor in a mixed martial arts lightweight fight at UFC 229 in Las Vegas. (AP Photo/John Locher, File)

McGregor lost the fight to Poirier via technical knockout with a doctor’s stoppage.

McGregor has promised to come back big from his injury, and Poirier and Dana White have both teased a fourth fight, but Nurmagomedov downplayed any chance McGregor would compete at a high level again by saying: “This man is ready, but he is good for promotion.”

Khabib Nurmagomedov, top, applies a rear naked choke hold to Conor McGregor during a mixed martial arts lightweight title fight at UFC 229 in Las Vegas, Saturday, October 6, 2018. Nurmagomedov won the fight by submitting in the fourth round to the title. (AP Photo/John Locher)

Nurmagomedov has been retired for about a year after beating Justin Gaethje in his last fight.

Nurmagomedov was on the receiving end of insults from McGregor leading up to their 2018 fight. McGregor famously insulted Nurmagomedov’s religion and family. After defeating McGregor, he jumped out of the cage to fight the entire team of McGregor and cause chaos at the T-Mobile Arena in Las Vegas.