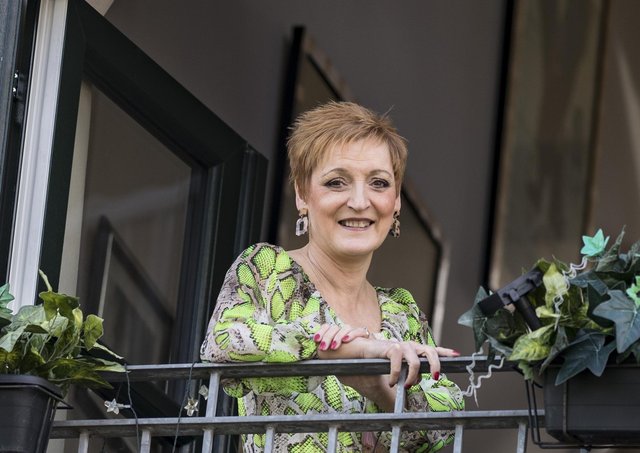 While standing in line at the grocery store, I saw a woman waiting at the cash register next to mine.

Her skin glowed red and she wore a strapless dress, the traces of her outfit from the day before were clearly visible. When I looked at her, I thought, ‘Oh my, what a shame’.

As someone with terminal stage 4 melanoma – also known as skin cancer – getting through a heat wave and seeing other people damage their skin is hard.

I know there will now be people who have been in the sun and the damage is already done.

They may think the burn will subside tomorrow and then the color will show up – but they will still have put themselves in danger.

UV rays from the sun cause skin cancer, and those who burn more easily are more likely to develop the disease. But it’s not just those who turn crimson who need to worry, anyone who spends too much time in the sun could be at risk.

Even when it’s cloudy, the sun is always there. A breeze, cloudy weather – it can be deceiving. The heat wave will subside in the coming days, but that doesn’t mean you can put away your sunscreen. I want people to know that they should always protect their largest living organ.

I was in my late twenties when I went to the doctor and was told it was skin cancer. The mole was removed and I lived in remission until 17 years later.

Since then, I’ve had three surgeries to remove the cancer from my leg, but it traveled in my bloodstream and in 2015 my right lung had to be removed.

Living with one lung is particularly difficult right now. Intense heat – or extreme cold – affects my breathing. I’ve had serious infections because chemo had compromised my immune system; I almost lost my life.

Fortunately, I am in the care of Leeds Cancer Center, whose five-year survival rate for melanoma is significantly higher than average.

Prevention is of course the best approach.

I want everyone to wear sunscreen every day, at least SPF 30, with both UVA and UVB.

When I was younger I just didn’t know this.

There was a tanning culture. We didn’t have the training then, or such an assortment of sun creams. People still used low factor oils and creams, not for health or protection, but for tanning.

I had hoped that people would know differently now, but then I have to wonder why people still get burned.

Melanoma is the deadliest form of skin cancer and the fifth most common cancer in the UK. This needs to be heard more.

Maybe you like getting a little tan, and that means you’re healthy? A big dose of vitamin D?

If you are burned, the skin is damaged. It heals on the top and eventually you tan, but you don’t know what’s going on underneath. Excessive exposure to UV changes our DNA.

Being told you have the C word is hard enough – being told you are terminally ill is a tough pill to swallow.

I know people who deny their cancer, but I knew I had to go ahead and deal with it.

The most important thing was to get the right care, and I was lucky enough to get that. I don’t let that C word define me. I will continue with everything I do and more.

That includes my epic fundraising mission, Jacqui’s Million, to support all cancer patients for Leeds Hospitals Charity. To date I have raised over £250,000 to provide specialist equipment, support research projects and improve the ward environment for cancer patients. I am determined to reach a million.

I have published a children’s book, Adventures in the Sun with Edi, Hassan, and Chen, with a fellow cancer patient, Sandra Hudson, who wrote the story, with illustrations by Rob Gilroy, to emphasize the importance of sun protection. The winnings go to Jacqui’s Million.

I want to change how Brits approach the sun – forever.

The book normalizes hats and sunscreen alongside buckets and spades, as three kids go on an adventure in the sun. Just as we teach children to wash their hands after using the bathroom, or brush their teeth before going to bed, sun protection should be a daily measure.

If you don’t think this message needs to be heard, Google the news stories about the children hospitalized with extreme sunburn this week.

Sun protection should become a basic habit. If we can educate children, they can be agents of change. Look how they tackle problems such as climate change. They not only educate the next generation, but also their parents.

We are all terminal. We all get up every day and have no idea what that day will bring. Things happen. Since my diagnosis, every day has been a gift. So my stance is that I should do the best with my life. If telling my journey only helps one person get cancer, that’s great.

I want to use my story to help other people understand that skin cancer isn’t just terrible, it’s a killer.

My generation is facing melanoma and skin cancer because of the lack of education. Let’s make sure our children get an education.

To donate to Jacqui’s Million, go to: www.justgiving.com/jacquismillion

LAKE : French bulldog dies of sunstroke and brain damage after short walk in the sun

Get your necessary lifestyle news and features straight to your inbox.

Not convinced? Find out more