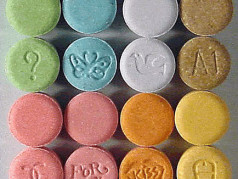 Ecstasy is the street name for a version of MDMA, or 3,4 methylenedioxy-methamphetamine. It is an illegal, synthetic drug classified as a stimulant with potentially hallucinogenic properties. Molly is another name for MDMA. Both ecstasy and molly are made from MDMA, but ecstasy is used to describe a designer version in pill or tablet form, while molly is used for the white powder or crystal-like substance.

Although molly is marketed as a pure form of MDMA, there is no way for users to know what is in it. Both molly and ecstasy can be cut with other ingredients, including:

MDMA in its pure form is hard to come by. Most of the drugs are smuggled into the US from Canada. MDMA is classified as a Schedule I controlled substance, meaning it has a high potential for abuse and is not currently accepted for medical use. If you or someone you care about has a problem with ecstasy, contact a practitioner for help.

Ecstasy and molly promote a sense of well-being, happiness and kindness. These drugs improve the user’s vision, sound, smell and touch. Ecstasy and molly are common in dance clubs and raves, allowing the user to take advantage of their heightened sensations. The effects of ecstasy use include:

Like most drugs, ecstasy and molly interfere with the brain’s pleasure center and natural levels of dopamine.

The high from ecstasy generally lasts between 3 and 5 hours. Depending on a number of factors, including body weight, gender, amount ingested and route of administration, the effects of Ecstacy can last up to 8 hours.

While the “high” from the drugs usually lasts only a few hours, the crash can last for days.

Because ecstasy is illegal, any use of it is considered abuse. Some versions of ecstasy and molly contain no MDMA at all and the person who buys them is none the wiser. Sometimes MDMA is replaced by PMA (paramethoxyamphetamine). PMA can induce similar feelings to MDMA, but the onset is longer. It has a much lower lethal dose, so when users try to take more to feel like they are getting from MDMA, an overdose is a serious possibility.

Overdosing with ecstasy means taking more than the recreational dose. An overdose of ecstasy can cause seizures, foaming in the mouth and a rise in body temperature. These can cause heat stroke or aggravate underlying heart disease, both of which can be fatal.

Ecstasy and other drugs

Ecstasy is often abused as a “party drug” and is popular among students, especially at raves and concerts. Studies suggest that about 1 in 10 college students have experimented with the drug, and the rate of polydrug abuse is much higher among ecstasy users than among other groups of drug users.

One study found that 98 percent of college students who had used ecstasy had also used marijuana. Ecstasy abusers were much more likely (from 3 to about 30 times) to abuse inhalants, LSD, cocaine and heroin.

Looking for a place to start?

Research and clinical views differ on how addictive ecstasy is, or if it is addictive at all. There are many people who report becoming addicted to ecstasy, but the clinical research on this is less extensive than with many other drugs. A number of studies have found that ecstasy is addictive, albeit to a lesser extent than many other drugs. However, that does not mean that an emerging ecstasy addiction is not a serious problem.

Recognizing an addiction to ecstasy can be difficult because the drug has no apparent withdrawal symptoms and is often used among young people in social settings. However, long-term use of ecstasy can lead to psychological and physical dependence. When a person is addicted to ecstasy, he or she will continue to use the drug despite its effects. Even if ecstasy isn’t the only drug causing addiction, it can be part of a patchwork of multiple drugs.

The most telling sign of an ecstasy addiction is wanting to quit, but not being able to.

Other criteria include developing a tolerance to ecstasy, spending an excessive amount of time trying to get it, and using more of it than intended. Read more about the criteria for diagnosing an addiction.

92% of those who start using ecstasy later turn to other drugs, including marijuana, amphetamines, cocaine and heroin.

The United Nations Office on Drugs and Crime estimates the number of ecstasy users (primarily teens and young adults) worldwide at approximately 9 million.

The number of emergency room visits due to ecstasy has increased by more than 1,200% since ecstasy became the ‘club drug’ of choice at nighttime raves.

Getting help during COVID-19

With just 30 days in a rehab center, you can get clean and sober, begin therapy, join a support group, and learn ways to manage your cravings.

If you or someone you care about is struggling with ecstasy use disorder, now is the time to ask for help. Learn more about the treatment of Ecstasy Abuse and Addiction or contact a practitioner now for more information about your options.