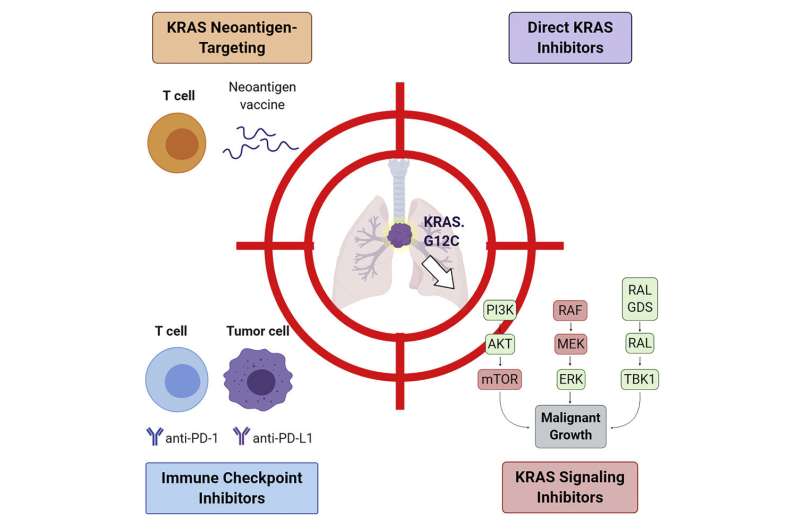 Solid tumor growth is often driven by mutations in important proto-oncogenes. For non-small cell lung cancers (NSCLC), somatic mutations in the KRAS (Kirsten RAt Sarcoma virus) gene turn it into an oncogene that renders tumors resistant to common chemotherapies such as erlotinib (Tarceva) or gefitinib (Iressa).

Previously, KRAS was considered “incurable” because the surface of the small protein did not have deep cavities for drug interaction with potential small molecule inhibitors. Since many NSCLCs depend on a constitutively activated mutant KRAS, researchers have continued to investigate KRAS and its downstream signaling pathways as potential targets. That research is finally starting to pay off. Complementary approaches to NSCLC lung cancer that collectively embrace immune self-defense within the context of the larger KRAS ecosystem have now come fully into the picture.

Together they are working on a therapeutic microcosm of tumor biology that can be copied and adapted to serve as a blueprint for the treatment of many cancers, each supported by their own unique oncogenic factors. In an article in Cell Reports Medicine researchers outline four ways to combat KRAS-dependent NSCLC: immune checkpoint inhibitors, KRAS neoantigen targeting, direct KRAS inhibitors, and KRAS signaling inhibitors.

KRAS mutations, such as G12C, can create new epitopes that can be recognized by the immune system as foreign proteins. Since the immune system has never been trained on a version of KRAS that only later mutated into the cancer cells, they will be seen as neoantigens to be attacked. The problem is, the immune system generally needs a little help by the time a tumor is detected. The goal of immunotherapy is to elicit a direct T cell response to these neo-antigens either through vaccination or through adoptive T cell therapy in which cells are externally trained, expanded and reintroduced. Moderna Therapeutics and Merck already have mRNA cancer vaccines in trials against KRAS G12C, G12D, G13D and G12V. The vaccine is encoded as a single RNA molecule neoantigen concatemer that should be optimally presented on HLA-A11: 01 and / or HLA-C ∗ 08: 02 receptors to enhance the CD8 + T cell response.

We have seen above how direct inhibitors of mutant KRAS can be effective, especially when administered with ICIs. The main benefit is that cells with non-mutated wild-type KRAS should not be affected by the drugs, reducing side effects. Another strategy against KRAS takes advantage of the fact that it is located on the plasma membrane to function by farnesylation of specific amino acid side chains. Unfortunately, farnesyl transferase inhibitors have shown poor results in clinical studies so far. Likewise, small molecule inhibitors designed to prevent GTP-KRAS interactions have also failed, mainly due to GTP’s high affinity for KRAS. Alternatively, pan-KRAS inhibitors such as BBP-454 (BridgeBio Pharma) have now been developed that can bind to previously unrecognized binding pockets. Another pan-KRAS inhibitor, BI 1701963, interferes with KRAS binding to SOS1, a guanine nucleotide exchange factor essential in activating KRAS.

The complete response of an NSCLC patient to chemotherapy depends on the presence of variants in other genes in addition to KRAS. For example, those who have an EGFR (epidermal growth factor receptor) mutation have a 60% response rate to erlotinib. It appears that KRAS and EGFR mutations are mutually exclusive to some extent. Lung cancer patients positive for KRAS mutation but not EGFR have a poor response to chemotherapy. As the full mutational landscape for KRAS is now rapidly emerging, effective treatment may include a combination approach of direct KRAS targeting and indirect targeting through synthetic downstream effector lethality. Synthetic lethality occurs when a combination of deficiencies in the expression of two or more genes leads to cell death, while a deficiency in only one of these genes does not. Mutations, epigenetic changes, and inhibitors can all cause deficiencies.

This document is protected by copyright. Other than fair treatment for the purposes of private study or research, no part may be reproduced without written permission. The content is provided for informational purposes only.