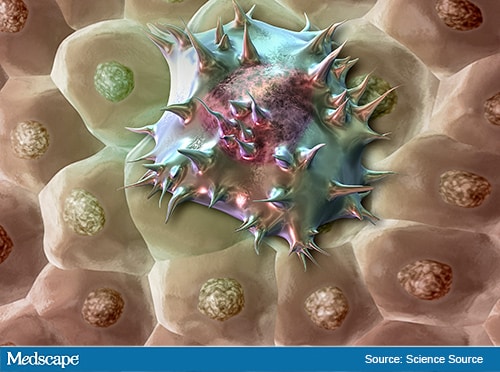 The ground-dwelling amoeba Dictyostelium discoideum may seem a world away from the tidiness of a cancer ward, but these microscopic creatures can teach us a lot about a disease that still kills more than 600,000 Americans each year.

Dictyostelium usually exists in a unicellular form, but when the food supply runs out, up to 100,000 cells will come together to create a small “snail” that migrates in search of more acceptable conditions. Once in a suitable place, the slug transforms back into a vertical stem with a bud-shaped fruiting body on top. Finally, the bud bursts, releasing microscopic spores, each capable of germinating into a new amoeba.


While this unusual life cycle ensures the survival of the population, it doesn’t directly benefit every amoeba that joins the snail. About 1 in 5 cells end up in the stem and thus are destined to die, sacrificing themselves for the greater good of the colony. But even in this simple society, there are “cheats” that break the rules.

In 1982, Yale University biologist Leo Buss noted that certain cells in a related Dictyostelium species would end up in the spore body rather than the stem — referred to as “somatic cell parasites” — giving them a much better chance of contributing to the next generation.

A quarter of a century later, researchers showed that the same selfish behavior also occurred in Dictyostelium discoideum and was due to mutations in one of over 100 different genes. Genetic variations that make it more likely for a cell to push to the top of the stem also increased its chances of survival and continued to multiply, creating a new generation of cells that also carry the same selfish mutation.

The same principle at work in these deceiving amoebae can be seen in the development of cancer in the tissues of the body. There is growing interest in the long-overlooked concept of cancer as a disease driven by cellular “cheats” – mutated cells that outcompete and proliferate faster than their well-behaved neighbors, eventually creating a tumor that grows and metastasizes through the whole body. In this view, cancer is seen as the inevitable consequence of multicellularity.

Cancer is a deeply biological phenomenon dating back millions of years and can be seen in almost all branches of the animal kingdom (with the notable exceptions of comb jellyfish and sponges). We find traces of tumors in long-dead fossils and ancient human remains all over the world. Wherever there are mutated cells in multicellular organisms, that’s where we’ll find the capacity for cancer.

The Darwinian Principle of Cancer Growth

However, it is too simplistic to assume that mutations are the only things that matter when it comes to creating cancer.

Recent work from researchers at the Wellcome Sanger Institute in Cambridge, England, have revealed that our bodies become a patchwork quilt of mutations as we age. Our cells pick up on all kinds of genetic changes as we go through life, some caused by the biological processes of life itself and others caused by external factors. Many of these changes would be classified as “tumor drivers” if found in a cancer.

The extent of this damage is astonishing. The Sanger Institute team found that: up to half of the cells carry a mutation in the prominent cancer driver gene in the esophagus NOTCH in middle age, despite looking completely normal.

While cancer is common in the population, with 1 in 2 people expected to develop the disease at some point, it is rare on an individual level. Barring any underlying hereditary gene variations, each of us can develop only one, or maybe two or three primary tumors in a lifetime among the trillions of individual cells and cell divisions in our bodies.

It is clear that the ability of cheating cells to develop into cancer depends not only on their genetic makeup, but also on their environment. The Darwinian principle of “survival of the fittest” is often misinterpreted to mean that the largest, strongest, fastest, or smartest organisms nearby will survive and multiply.

In fact, natural selection favors those who best suit the environment in which they live. In the context of cancer cells, this is the microenvironmental environment of our tissues. The proliferative and migratory abilities of rebellious mutated cells depend not only on their genetic makeup, but also on the advantage these mutations give them in terms of their suitability within the local tissue environment.

Note that this microenvironment changes as we age. Inflammation, physical changes resulting from the breakdown of collagen and other structural elements, the gradual build-up of mutations in healthy cells, and other processes all shift the molecular landscape in our tissues. Potentially cancer-causing mutations that can harm young tissue become a boon in an aging, inflamed environment, providing a selective advantage that allows dangerous cells to thrive.

In addition to supporting tumor development in normal tissue, evolutionary principles are also at the heart of the challenge of treating advanced metastatic cancer. In recent decades, there has been a move toward an increasingly genetically reductionist view of cancer, driven by the plummeting costs of high-throughput next-generation sequencing technology. This has strengthened a paradigm of increasingly targeted cancer therapies based on the underlying molecular makeup of an individual patient’s disease.

But for all the fanfare and high price tags, targeted therapies haven’t delivered the groundbreaking survival gains the headlines had promised. Immunotherapy has enormous potential, although the current line of checkpoint inhibitors does not work for everyone and in some cases, cancer can even get worse.

Notwithstanding the success of Gleevec (imatinib) – the banner for molecularly targeted therapies – most of the current generation of treatments bring survival on the order of single digit years, months or in some cases as little as weeks for advanced metastatic disease. In all too many cases, no matter how successful the treatment may seem at first, at some point the cancer comes back. At best, oncologists can adopt a “whack-a-mole” strategy, following each failed line of therapy with another until options run out.

The cause of this failure is heterogeneity. Cancer cells are on a continuous evolutionary journey of mutation and proliferation, creating a genetically diverse population with a range of selective advantages and disadvantages depending on the selective pressure at work. Once a cancer has reached a certain size, somewhere in this heterogeneous population will be cells with mutations that make them resistant to any treatment they can get. Even within a tumor the size of a sugar grain, the germs of resistance may already have been sown.

It’s time to think smarter about how we approach cancer treatment, recognize the evolutionary power of cancer, and use it to our advantage. Adaptive therapies, developed by pioneers such as Robert Gatenby and his colleagues at the Moffitt Cancer Center in Tampa, Florida, aim to direct the cancer pathway by balancing populations of resistant and susceptible cells through careful monitoring and dosing. This approach has showed remarkable success in advanced prostate cancer and is now being tested in other tumor types.

However, adaptive therapies are still aimed at controlling cancer rather than eradicating it. To do that, we need to think about extinction strategies: regimes designed to apply specific selective pressures at the right time to collapse the cancer cell population, as do multiple different factors (shrinking habitat, disease, predation, and so on) animal populations. with extinction in nature. Unfortunately, there is little interest in developing and testing such strategies based on the drugs we already have, compared to the pharmaceutical industry’s enthusiasm for developing increasingly expensive therapies.

This is not to say that progress has not been made. After more than a century of research, about half of all people with cancer in countries like the United States and the United Kingdom will survive for 10 years or more, especially if diagnosed in the early stages of the disease. But armed with a deeper understanding of all three elements of cancer — cellular mutations, tissue ecology, and evolutionary pressures — we’ll get closer to catching all of cancer’s “cellular cheats” before they can take hold and become resistant to treatment.

Kat Arney, PhD, is a science writer and broadcaster living near London, England. She is the author of Rebel Cell: Cancer, Evolution and the New Science of Life’s Oldest Betrayal (BenBella Books).